For two years, brothers Peter and John Kepma from Kurumbukare have been resisting attempts by the Chinese owned Nickel Mine to force them onto a temporary camp site.  In September  2010,  a group of armed police accompanied by mine workers  forcefully evicted them from their  ancestral home. The brothers documented how their huts were demolished and their lives destroyed.


On the morning of  the 8th of  September  2010, John Kepma  was  suddenly awakened  by  noise outside his hut . He  peered through the cracks in the wall  and saw  several policemen  who had begun pulling down  his dwelling.
He came out of his hut and was confronted with a sight he had come to  both dread and expect.   Armed policemen  had begun an eviction of   remnant members of the  Maure  clan who had refused to move to a temporary relocation site.  His clan members included  his father, his uncles his older brother, Peter  and several children.
“One of the ‘officers of the state’  told us that we were weren’t landowners and that he would get three other clans to burn our houses down and chase us off  the land, ” John  recalled.  “He said: ‘all of you come out and pack your things  and leave,’ then he began breaking down  the houses.” 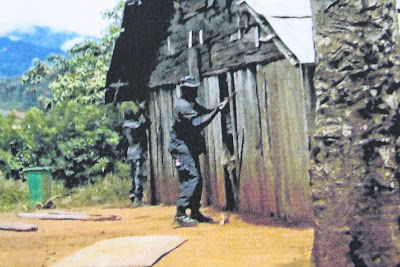 Since January last year,  John and his older brother Peter  had become the face of a people’s  resistance  against  the   Chinese owned Ramu Nickel  Mine’s  push  to  evict them from their own land.     On  eight previous occasions last year,  older brother Peter was  confronted by heavily armed police who demanded that he pack up and leave. But each time he refused.
“They came  armed and  dressed in their uniforms. They wanted me to leave.,” he said. “But I told them: this is my land  and I will stay here. This is an issue between me and MCC. You all are not from China. You’re all  Papua New Guinean like me. You own land as well.” 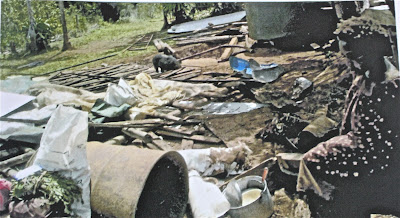 The Maure  of Kurumbukare  are  a small clan  that control a small land area. For Peter Kepma,  the success of this resistance  is crucial.   His clan’s survival depends on the land on which they live. But  this large scale mining  development  has taken away their very means of survival – their ancestral land. “Our entire clan land  will be mined for   nickel, ”  Peter says. “We’ve been forced to move to a temporary relocation site but that too will be mined later.
“They’ve told us that we’ll be moved to a permanent site but that land belongs to another clan and we won’t be allowed to plant gardens or hunt.” Like the majority of rural Papua New Guineans,   becoming landless  is unthinkable.  It simply doesn’t happen.     But for Peter, John and members of his clan,  it has become a reality.   With nowhere else  to  live, the clan  planted a food garden  on an area designated  as the mining company’s  ore stockpile area.  John says  that  they had no choice but to plant on what is now the company’s  land.  Members of their family now reside on the fringes of what was their customary land.  Their huts perched  on a small mountain ridge overlooking the mine site. They’ve been living there for the last two years despite talk of relocation. When the eviction began, John documented it all using a digital still camera.
He took pictures of  his village being demolished and of his displaced family.  He even took pictures of a Chinese  company worker who told him not to go to the media.  John  and Peter said they want the world to know  about the things that are being done to them and how they’re being treated  on their own land.
Ends…

2 comments on “FINALLY EVICTED FROM THEIR LAND”